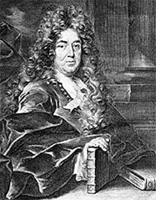 Charles Perrault was a French writer who lived in the second half of XVII century. He was one of the first writers in European literature who turned his eyes to folklore.
Born in 1628 in a clerical bourgeois family, Perrault received legal education and had high royal office.
In the second half of XVII century there was a dispute amidst French writers about the advantage of modern writers compared to the writers of antiquity. Charles Perrault played an important role in this dispute, opposing to the genre and thematic limitations of classical literature.
In 1671 Charles Perrault was elected to the French Academy of Sciences.
In Folk Art Perrault found rich stories and images to create new artistic works. He turned to folklore by collecting a number of stories and published them in 1697 under the title "Tales of mother Goose". This collection included eight fairy tales, including "Little Red Riding Hood", "Puss in Boots", "Little Thumb" and "Cinderella." In subsequent editions Perrault added two more stories and a novelette.

1.Cinderella, Or The Little Glass Slipper

2.The Sleeping Beauty In The Woods

4.The Master Cat, Or Puss In Boots

5.Riquet With The Tuft