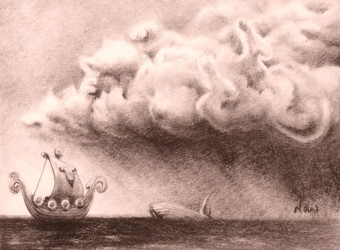 One day Raven was sitting on a cliff near the sea when he saw a large whale passing close along the shore.

"I have an idea!" said he. "I'm going to try something new." Then he called out to the whale, "When you come up again, shut your eyes and open your mouth wide, and I'll put something in it."

Then he drew down his mask, put his drill for making fire under his wing, and flew out over the water. Very soon the whale came up again and did as he had been told. Raven, seeing the wide open mouth, flew straight down the whale's throat. The whale closed his mouth, gave a great gulp, and down he went to the bottom of the sea.

Raven stood up, pushed up his beak, and looking about, found himself at the entrance to a fine room, at one end of which burned a lamp. He went in and was surprised to see a beautiful young woman sitting there. The place was clean and dry, the roof being supported by the whale's spine, while its ribs formed the walls. The lamp was supplied from a tube that extended along the whale's backbone, from which oil constantly but slowly dripped into the lamp.

When Raven stepped in, the woman started up in alarm and cried out, "How came you here? You are the first man who ever came into my house."

"I came in through the whale's throat," said Raven as politely as he knew how, for the woman was young and fair to look upon. Moreover, he had already guessed that she was the inua or spirit of the whale. "I should like to stay a while."

"As you cannot get out at present, it seems that you will have to stay. Whether you like it, or whether I like it, you appear to be my guest, so I must prepare food for you."

She brought food which she served with berries and oil. "These are berries which I gathered last summer," she said.

For four days he remained there as the guest of the whale's spirit, and found it a very pleasant experience; but he continually wondered what the tube was that ran along the roof of the house. Whenever the spirit woman left the room she said, "You must on no account touch that tube," and that only served to make him the more curious.

On the fifth day, when she left the room, he went to the lamp and caught a drop of the oil which he licked up with his tongue. It tasted so sweet that he began to catch other drops as fast as they fell. This soon became too slow to suit him, for he was hungry, so he reached up and tore a piece from the side of the tube and ate it. As soon as this was done a great rush of oil poured into the room and put out the light, while the room itself began to roll wildly about.

This continued for four days, and Raven was nearly dead from exhaustion and the bruises which he received. Then the room became still and the whale was dead, for Raven had torn off part of one of the heart vessels. The inua never came back to the room, and the whale drifted upon the shore.

Raven now found himself a prisoner and was saying to himself, "Now I am in a pretty boat! I have enjoyed the trip, but how is one to get out of a kayak like this?"

Presently he said, "Hark! What is that I hear? As I live, it is someone walking on the roof of the house!"

And he was right, for two men were walking on top of the dead whale and calling to their village mates to come and help cut it up. Very soon there were many people at work cutting a hole through the upper side of the whale's body.

Raven quickly pulled down his mask, becoming a bird, and crouched close in the farthest corner. When the hole was large enough, he watched his chance and while everybody was carrying a load of meat to the shore, he flew out and alighted on the top of a hill close by without being noticed.

"Ah, my good fire-drill; I have forgotten it," he exclaimed, remembering that he had left it behind.

He quickly pushed up his beak and removed his raven coat, becoming a young man again. He started along the shore toward the whale. The people working on the dead animal saw a small, dark-colored man in a strangely made deerskin coat coming toward them, and they looked at him curiously.

He rolled up his sleeves and set to work. Very soon a man cutting on the inside of the whale's body called out, "Ah, see what I have found! A fire-drill inside a whale!"

At once the wily Raven rolled down his sleeves and quit work, saying, "That is a bad sign, for my daughter has told me that if a fire-drill is found in a whale and people try to cut up that whale, many of them will die. I shall run away before the inua of the whale catches me." And away he ran.

When he was gone the people looked at one another and said, "Perhaps he is right; we'd better go too." And away they all ran, each one trying to rub the oil from his hands as he went.

From his hiding-place Raven looked on and laughed as he saw the people running away. Then he went back for his raven coat and when he had put it on and pulled down his beak he flew to the carcass and began to cut it up and fly with chunks of the flesh to a cave on the shore. He did not dare go to it as a man lest the villagers should see him and, discovering the trick he had played them, should come back for the meat. As he chuckled over the feast in store for him he said, "Thanks, Ghost of the whale, both for the boat ride and for the feast."

A Treasury of Eskimo Tales